Some of my mitts patterns (e.g. San Marco and San Donato) involve working a tube of stranded colourwork in the round, then creating a thumbhole using steeking.  Additional columns of steek stitches are created as the mitt is worked.

I prefer the crochet method of reinforcing a steek, and can thoroughly recommend the tutorial by Kate Davies which can be found here. I used this tutorial the first time I ever tried steeking, with total success. It is not really as scary as it might seem!

Anyway, for someone new to steeking these mitts are a great way of practicing the skill on a small project first, as the steeks are quite short.

The photo below shows the 7 columns of steek stitches worked as part of the San Donato Mitt: 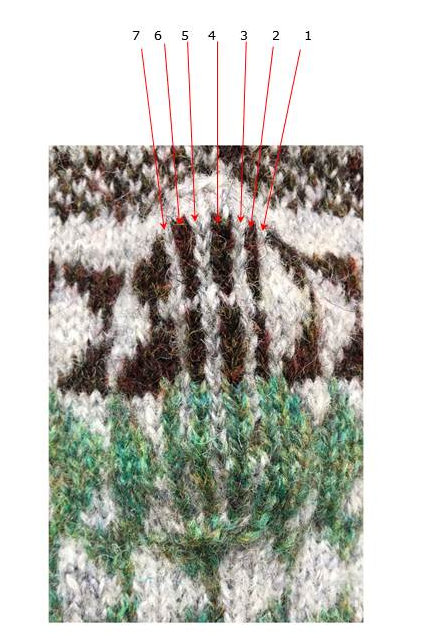 Here’s a picture of the finished steek before cutting down the middle of the stitches in column 4.

And here’s a picture of the steeks in the San Marco mitts, after a fair bit of wear, showing how the edges have not frayed. 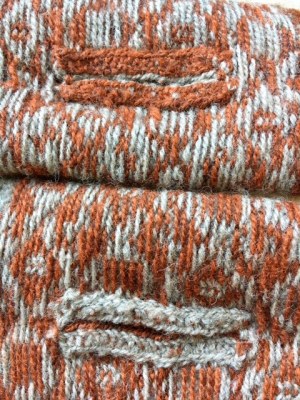 For greater detail on this technique, see the Kate Davies tutorial, noting that her example uses 5 instead of 7 steek stitches (therefore stitch 3 in my example equates to stitch 2 in hers).

View all posts by skeinreaction

Just a reminder, for Fruity Knitting patrons, that the discount code in my Ravelry store ends at midnight (UK time) on Tuesday 25th January! #fruityknittingpodcast #ravelrydiscount #ravelry #knittersofinstagram #knittersoftheworld #skeinreaction
I have added two new photo tutorials to my website covering crochet provisional cast-on and grafting/Kitchener Stitch. The latter covers grafting stockinette and garter stitch as well as some additional information on grafting in the round.
I do enjoy screenprinting with bright colours in the depths of winter!
Belated wishes for Happy New Year! And a very warm welcome to all my new followers!
I forgot to mention in my previous posts that there’s a 25% discount on all patterns in my Ravelry store until 25th January for patrons of @fruityknitting as well as a 15% discount on yarns from @bordermillshop until 24th January. Do check out Episode 117 of the Fruity Knitting podcast and consider becoming a patron to access these and other benefits. Happy Shopping!
I’m so honoured and excited to appear in the latest episode of the Fruity Knitting podcast in the ‘Knitters of the World’ segment. Do check it out over on their YouTube channel and, if you’re not already, do consider becoming a Fruity Knitting patron!
Loading Comments...
%d bloggers like this: